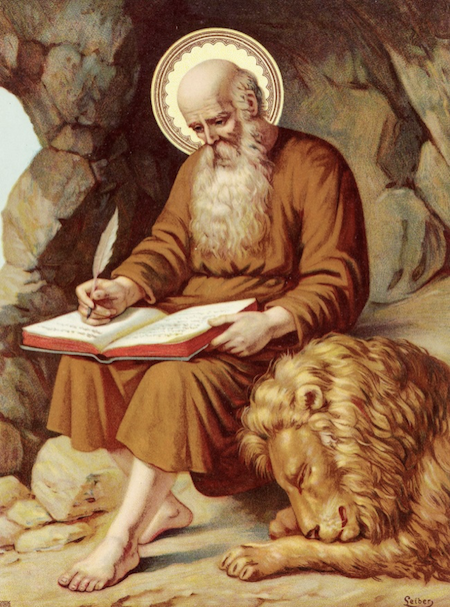 Priest, Doctor of the Church

A major figure in the scholarly work of the early church, St. Jerome was born Eusebius Hieronymus Sophronius His father, a prosperous Christian landowner, tutored Jerome in the first principles of both letters and religion, and rolled him at an early age in the local Christian catechumenate to prepare him for baptism, after which he sent to Jerome to Rome (about 360) for a classical education. Here Jerome studied the Latin, and later the Greek pagan authors under the tutorship of the famous grammarian Aelius Donatus. Although baptized in Rome by Pope St. Liberius he slipped into spiritual laxity. He remained a student in Rome for three years, however, after which he and a friend traveled to Trier, in modern Germany, where his religious spirit was rekindled and he first became aware of his inclination towards the religious life.

After emigrating to Antioch in about 374, Jerome fell ill and experienced, in what he described as a dream, a deep sense of sinfulness before God. This seemed to influence deeply his life and precipitate his decision to withdraw from classical studies in favor of biblical scholarship and ascetic life. Living the life of a hermit for four years in the desert of Chalcis, Jerome practiced a life of constant prayer, mortification study, especially the Hebrew language.
He returned to Antioch and was ordained a priest. In 382 Jerome went to Rome to attend the Council convened by Pope Damasus I, after which Damasus retained Jerome as his secretary. Under this patronage, Jerome’s biblical scholarship flourished. He first revised the Latins Psalter according to the accepted Greek text of the Septuagint, and then the Latin version of the New Testament. Amidst this success as papal secretary, however, Jerome managed to get himself disliked, being harshly outspoken and bitterly satirical.

Small wonder, then, that Jerome felt compelled to leave Rome in after Damasus is that. He went to Bethlehem, where, about 686 he established a monastery and convent, largely through the generosity of his patron and friend, St. Paula. He also found a free school and a hospice. This period of Jerome’s life saw him occupied with a number of bitter theological controversies. It was also during this period that he translated the Old Testament directly from original Hebrew text. This translation, later included in the Vulgate additional Bible, was the first great Catholic attempt to understand the work of God from the original and is Jerome’s chief contribution to biblical scholarship. In addition to his translations, Jerome wrote many books of commentary on individual parts of the Scripture. The Catholic Encyclopedia divides his total endeavor to five major categories consisting of: works in the Bible, theological controversies, historical works, letters translations.
St. Jerome’s life, devoted to the word of God, was founded on the doctrine expressed in his own words: “not to know the Scriptures is not to know Christ.” Worn out by penance and work, his sight and voice fading, his body like a shadow, Jerome died peacefully on September 30, 420. Thus, St. Jerome’s feast day is on September 30th.